What a wonderful way to finish off winter 2015 …. meeting up with Sarah, Rob, Aliana and Oliver on this beautiful island on the outskirts of the Caribbean Sea!

I had hoped this would be my year to leave Calgary’s winter behind …. and I just about made it!  … The handful of months has been superb, despite missing family!  Such a joy to have Aliana jump in my arms when I arrived in Providenciales on this far flung Turks and Caicos island … she whispered as we hugged … “grandma, I have missed you so much”!  Warms the heart!  Little Oliver has grown so much in the two months since I last held him … smiles and chuckles now every time I “chat” with him …. wonderful to be around these two munchkins again!

What continues to overwhelm, even after a few weeks here, are the stunning turquoise waters that are the defining feature of this windswept island.  We never cease to marvel at the view outside our condo window every morning when we wake.  Simply takes ones breath away.   I immerse myself and savour its beauty daily on a leisurely swim.  Sarah takes Aliana out for kayak and paddle board time on the water while I care for Oliver, who at four months, still naps several times a day …. good peaceful family time overall, interrupted only occasionally by Aliana’s temperamental moments, which were a rather surprising, new, ummm, not so very pleasant development for me to experience 🙂 …. I left a charming toddler in early February to find a willful little tyrant had replaced the charmer 🙂 …… always easy for a grandma to laugh her way through the ages and stages of a child …. watching grandchildren develop and grow surely must be one of life’s underrated joys …. trying to capture some of that via these pictures …. which of course, never quite does the experience justice …

but is my valiant attempt at any rate … 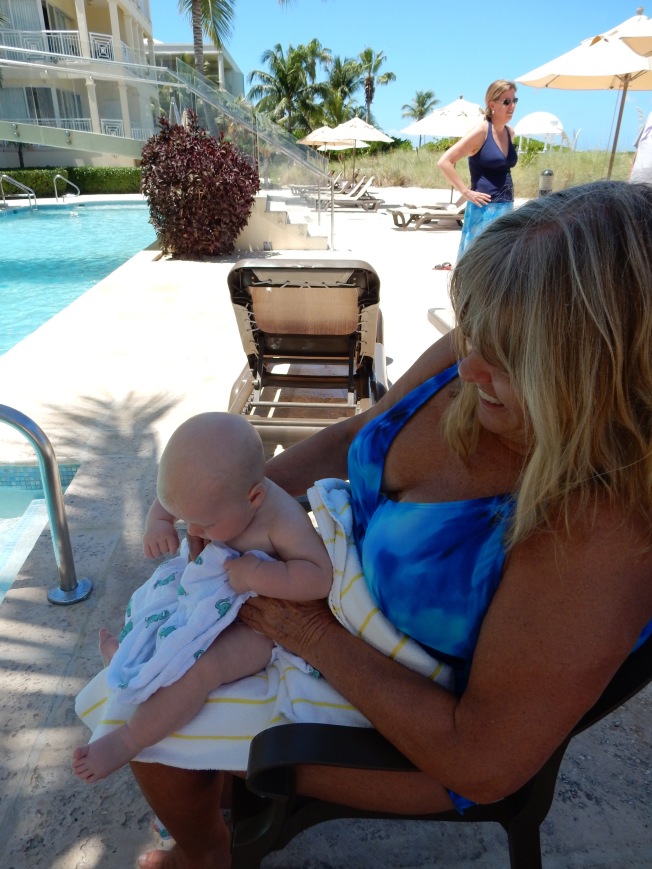 Rob even gets into the spirit of the water 🙂

Not so sure about this beading business ….. 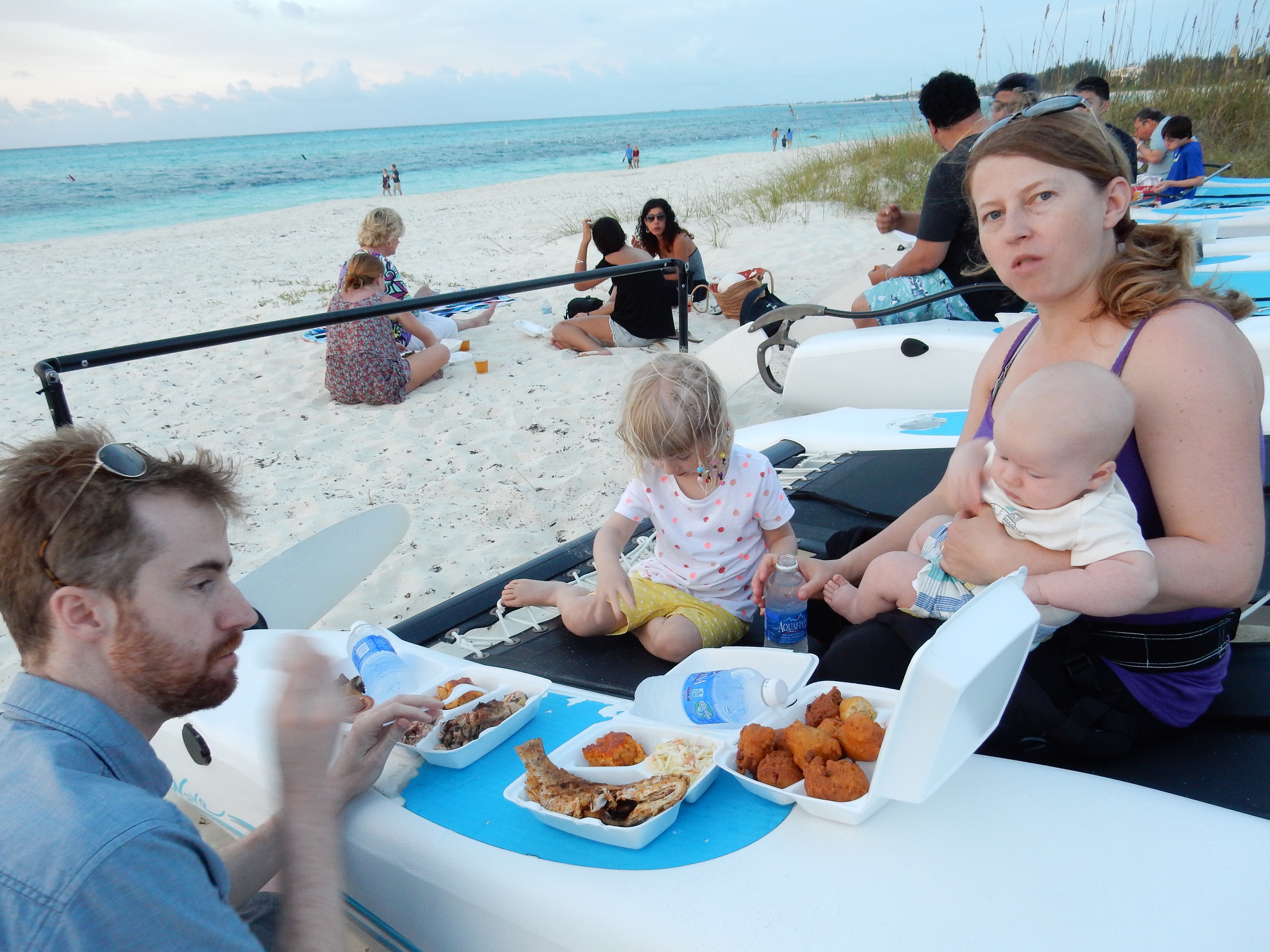 Aliana gets into grandma’s bead patch! 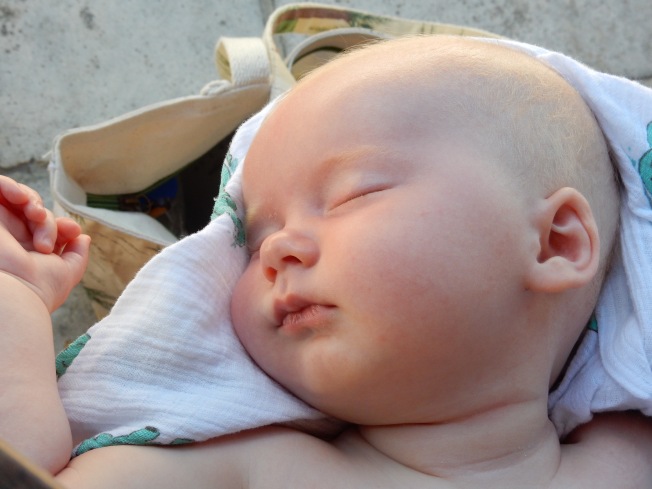 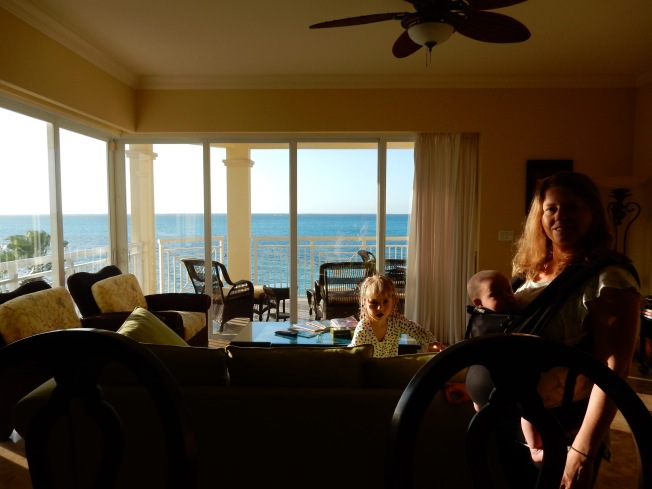 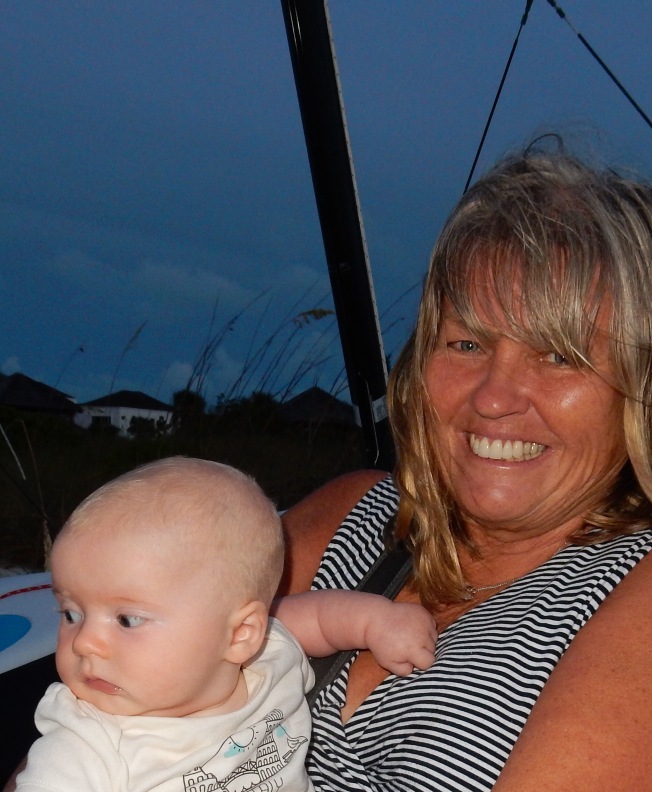 San Miguel de Allende has long been characterized by its sense of religious tradition.  During the Holy Week of Easter, the streets of this old town are turned into real rivers of mastranzo, an aromatic herb, chamomile and flowers, representing Christ’s path on the way to the cross and later to his tomb.  The many processions are silent somber affairs and are a way of reviving the justice, love, honesty and sanctity of Jesus, who gave his life to save humankind.  I respect their adherence to these old traditions and on a personal note, I do like the heavy emphasis Mexicans place on Mother Mary’s role in the life of her son.  Refreshing in a religion dominated by male adulation, pomp and circumstance.

On the week leading up to Good Friday, there were elaborate altars set up everywhere in the city to honour the  ‘tears of Mary’  including in our villa entrance, where housekeepers Alisa and Alejandro decorated an altar for Bev and I …. both are quite religious sorts, and blissfully unaware of our heathen tendencies ☺️ ….. The long processions were many and varied throughout the weekend … the most bizarre spectacle however, on Easter Sunday,  were the lines of puppet ‘Judas’ figures hanging piñata style in the town square and subsequently blown up via internal firecrackers … after watching this weirdly strange ritualistic custom for awhile …  I opted to go into the Parroquia for Easter service instead.  Very peaceful and moving …  I have always enjoyed sitting in churches, despite my pagan ways …. As my waunderlust most often surfaces in the spring, I usually end up in a church in some country or another on Easter Sunday!  Go figure 😗 ….. the duality that lives within! …. so often I embrace polar opposites, take the good and rock and roll along.

Alisa and Alejandro proudly standing beside the altar they created for us … fresh camomile flowers, oranges, figurine of Mary, candles and purple and white paper decor

Yet another altar for Mary 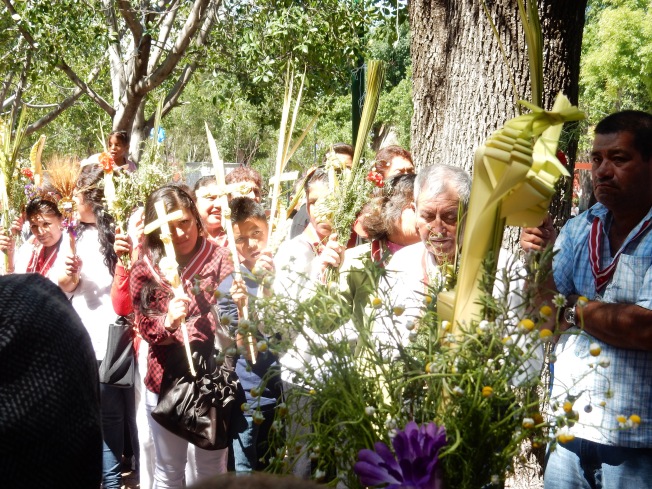 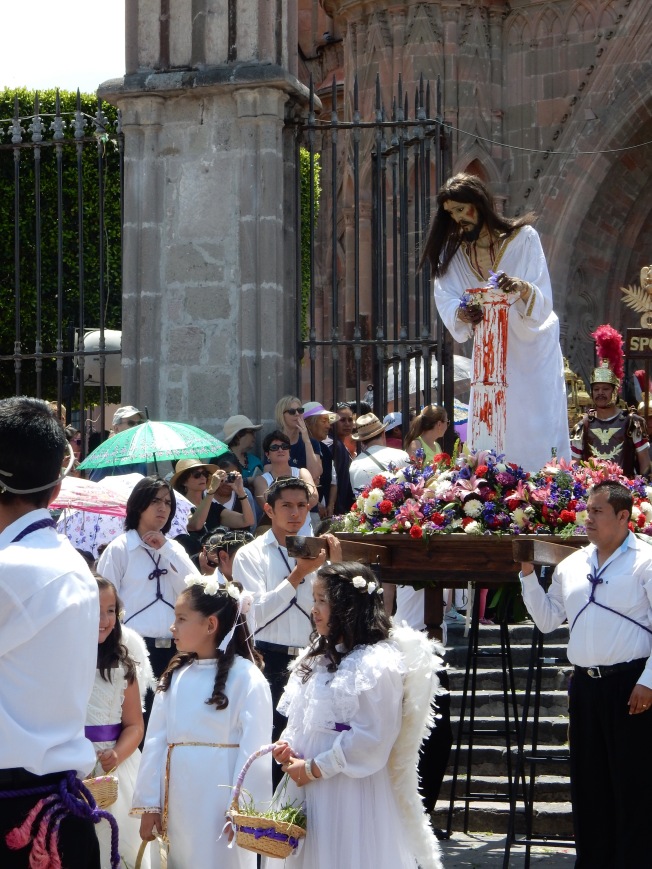 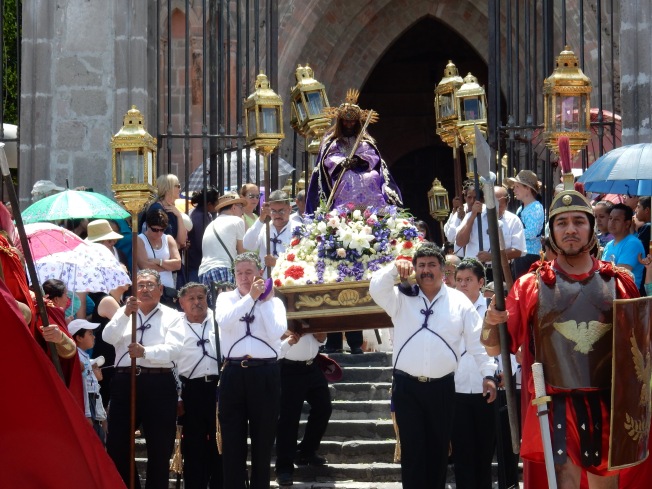 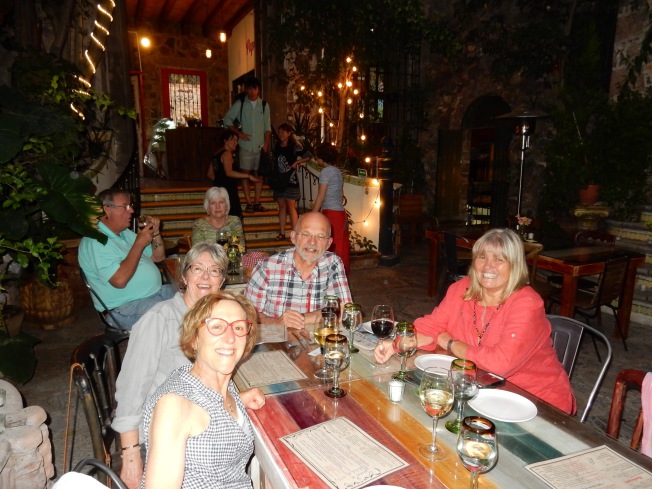 Fun night out at Jazz club …

Enjoying the sunset with friends …. 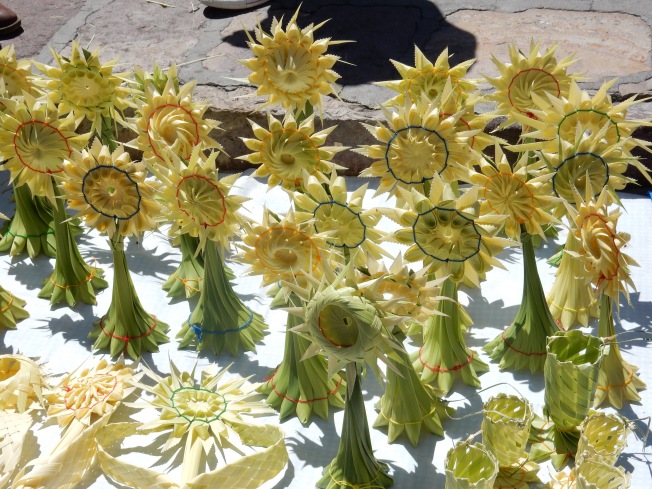 Bev and I host another little dinner party in our villa …. 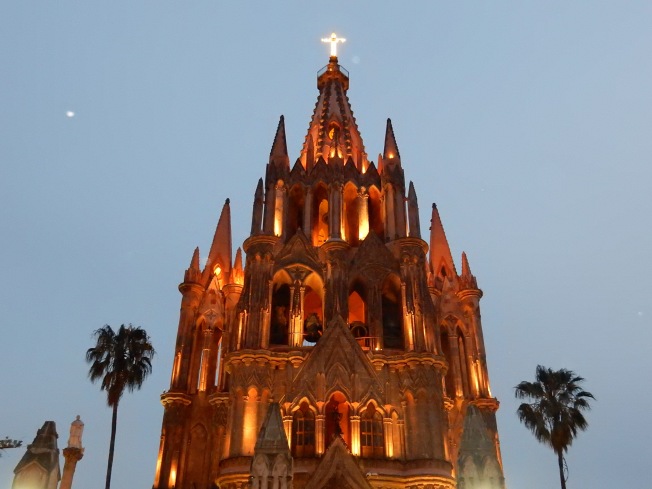 Will miss this beautiful Parroquia … adios San Miguel de Allende … til we meet again next year!