It was a rather pleasant, half hour flight to our destination for the next two weeks, the yoga/meditation capital of India, Rishikesh! …. The taxi ride from Dehra Dun Airport to the Parmarth Niketan Ashram took slightly longer ….. a pleasant drive on a winding road through rolling forested hillsides, skirting the Rajaji National Park, home to 400 plus wild elephants, 30 tigers and a few hundred leopards and numerous species of deer, was a delight after the pollution and hectic pace of Delhi and Agra. There were many signs along the road, warning of wild elephant attacks on vehicles, complete with pictures of an actual attack (see below) … we were kind of hoping but hardly expecting to actually see an elephant … but right along the roadside, halfway to the Ashram, an elephant appears ….. our driver did not want to stop. I snapped a picture as we drove by, Japanese tourist style 🙂

Check-in was a slow process, or possibly we were just slightly impatient … not yet settled into the groove of the slower paced, meditative ashram life style …… thousands of forms, signatures, stamps and the like … okay, well maybe not thousands, maybe it was just two 🙂 … we made our way to our air conditioned rooms (horray!! …. something we were sure hoping for but not counting on getting) …… despite the AC, not exactly the Ritz here at the Parmarth but appropriate for the somewhat reverent spiritual atmosphere and nothing a bit of wiping and washing things down with disinfectant couldn’t fix …… what else to expect from two ladies of German and Finnish ethnicity 🙂

Temple bells rang, not long after settling in, heralding the nightly ‘ganga aarti’ …. a religious ceremony on the banks of that holy Indian ‘shrine’ ….. the River Ganga! …… certainly a reverent intro to this mecca for spiritual seekers ….. I rather enjoyed the drumming, singing, chanting, the lighting and passing around of candles. People watching was cool as well … lots of folk filling water jugs, dipping their feet, or washing hands in the cool waters of the fast flowing river ….. I saw an older lady drinking from the river …. Hmmm, not common and think I may pass on that! The river is very sacred to Hindus and is a place to wash away a lifetime of sins. A large statue of Vishnu stands on a platform style bridge over the river, overseeing the rituals of the aarti. There are so many Hindu deities, making this religion darn hard to figure out. The explanations from Indians themselves can often be confusing, so although the rituals are lovely to watch, I remain clueless to the significance of many of them. Although this is my second visit to India, and second time at a Ganga Aarti (first was in Varanasi), the number of people around all the time, still manages to astonish me …. I always think there must be a special holiday or something going on to attract such large crowds, but no, the crowds are there all day, every day! It is India after all, home to a few billion souls.

A communal vegetarian meal followed ….. I have been told meat dishes are not common anywhere in Rishikesh ….. no hardship for me! Madeline and I were both exhausted from the day and it’s infusion of sights, sounds, crowds, and oh yes, definitely smells, and crashed shortly after dinner, ready for our first sleep in a real live ashram 🙂 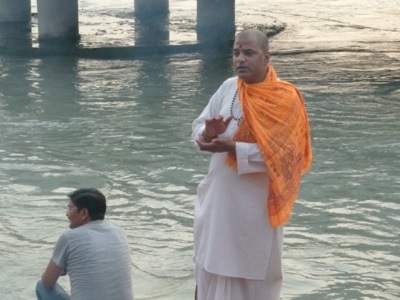 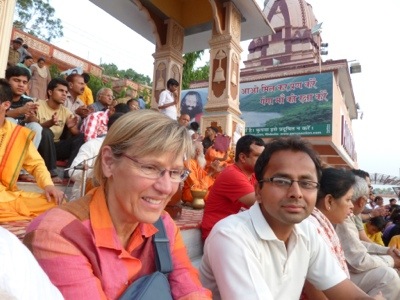 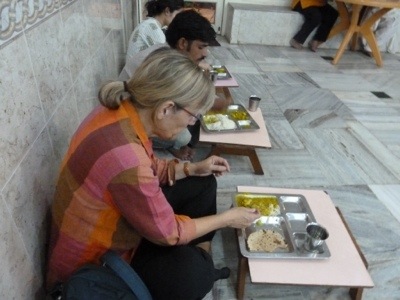 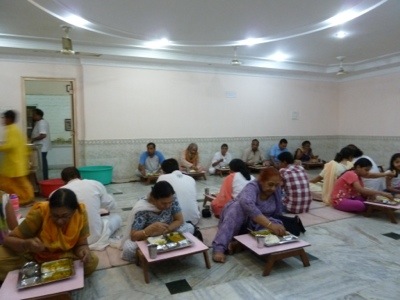